"It all started with a piece of bread"

How did this project against food waste in schools come about?

We saw a group of children who were eating in one of our dining rooms. And there was more bread left over than there were students in the lunchroom. They were only eating the centre part of the slice of bread. So then we thought that we had to do something.

Every European wastes 200 kg of food a year

While a large part of the world’s population has to live with scarce resources, at home we throw away a lot of food that could be taken
advantage of.

Throwing food away, besides wasting the natural, technical, and human resources necessary for its production, also means generating waste, as well as its impact and the additional costs involved in waste disposal. So when it comes to preventing waste, we are talking about much more than taking full advantage of food. We’re talking about a responsible, critical attitude towards consumption and an effort to reduce the amount of waste we produce.

We understand time in school lunchrooms to be an educational opportunity to acquire healthy eating habits and social skills. We have the opportunity to raise the awareness of future generations regarding sustainable models. So we saw the opportunity of setting up the Weigh and Think project as a tool for developing a critical awareness of food consumption and a proactive attitude towards reducing food waste and waste production in general.

The experience in the food reuse field is the starting point to generate an educative programme aimed at children and teenagers in 2012.
Once the pedagogic file was developed and the steps to carry out the Weight and Think Project in school canteens were defined, we implement the fist pilot test. We develop it at the beginnings of 2013 and from the second month and in a sustained way, we achieve a reduction of the 35% in the food waste.
Among the thirty schools which have been developing the project in a continued way from its beginnings, the decrease in the waste of food is already established around the 70%.

Children, the driving force behind the change towards responsible consumption

May 2022
The reference forum in innovation Food 4 Future – Expo Foodtech invites three projects to reduce the food waste: Mercabarna, Espigoladors and Weight and Think.
November 2019
The programme of the “Kid’s Innovation Day” counts on the Weight and Think experience through the experience of Eix Estels to develop the project to raise awareness within children in the school canteens of their camp houses.
October 2019
The Weight and Think is the case study which will inspire the III Game Jam organized by Singularity Foundation, St. Peter's School, ENTI-UB and Humantiks, with the participation of 250 students aged between 12 and 17 from 30 schools from the Barcelona area.
September 2019
The 7th Congress AECOC against the Food Waste invites the Weight and Think Project to present its experience in a talk about the educative environments against food waste.
November 2018
Weight and Think is part of the “Afterwork Conversations about Food Waste”, conference organized by Tandem Social and Espigoladors.
October 2018
The 5th Rubí Brilla Congress chooses Weight and Think as the best experience in circular economy of proximity, by popular voting of the participant public.
October 2017
Weight and Think is one of the selected experiences to be part in the visit of a delegation from France, the United Kingdom, Poland and Italy to know several pioneer initiatives in the struggle against the waste in the framework of the ECOWASTE4FOOD project.
November 2015
The Weigh and Think Project participated as an activity in the 6th European Week for Waste Reduction, from 22nd to 30th November, 2014.
September 2015
The organizers of the Semaine Européenne de la Réduction des déchets (SERD) in the Yle de France region choose the Project as an example of good habits and invite the driving force of the Project, Martí García, to share the case as educative experience in Paris.
May 2015
The Weigh and Think Project is presented at the Forum of the Catalonia Network of Schools for Sustainability in Terrassa.
Over the course of the 2014-2015 school year over 3000 children participated in this activity for schools in the Vallès Occidental, Baix Llobregat, Anoia, Penedès and Barcelonès counties.
May 2015
The project was a finalist in the European Week of Waste Reduction Awards, after an independent jury of European specialists gave their verdict in Budapest.
February 2015
The ACR nominee Weigh ant Think project implemented by Campos Estela to represent Catalonia at the European Week Waste Reduction Awards for business/industry category
January 2014
The Weight and Think has a pedagogic file developed in 2013, in which it is defined the step by step to carry out the experience in school canteens. The pilot test of the project is set between the months of January and June in 2014 in a Penedès School.
October 2012
The experience in the waste food field is the starting point to generate an educative programme aimed to children and teenagers. This will be the basis of the Weight and Think initiative.

Join the Weight and Think project 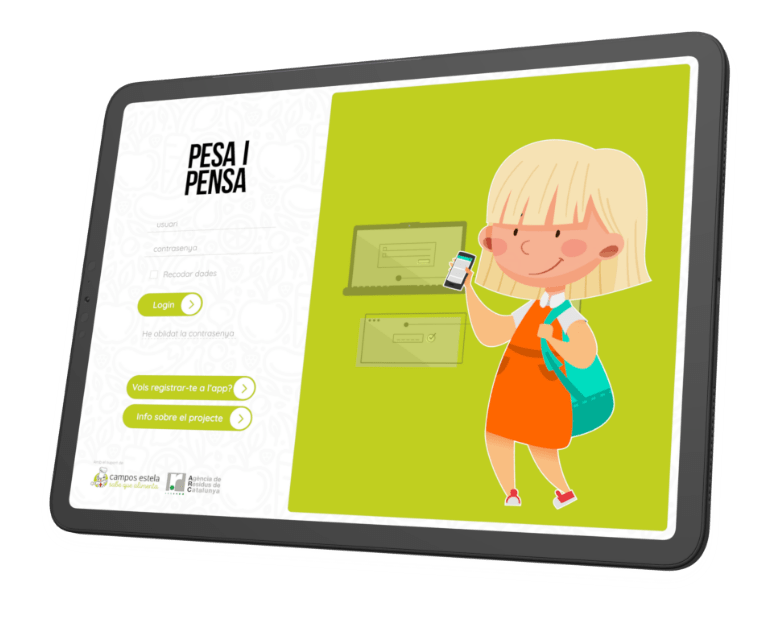